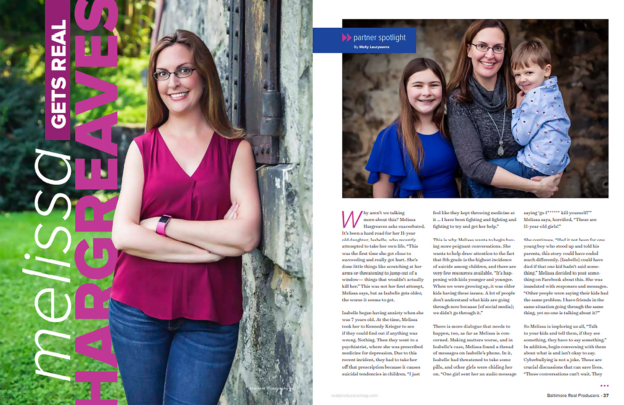 This article by Molly Lauryssens was originally published in the September 2021 issue of the Baltimore Real Producers magazine. 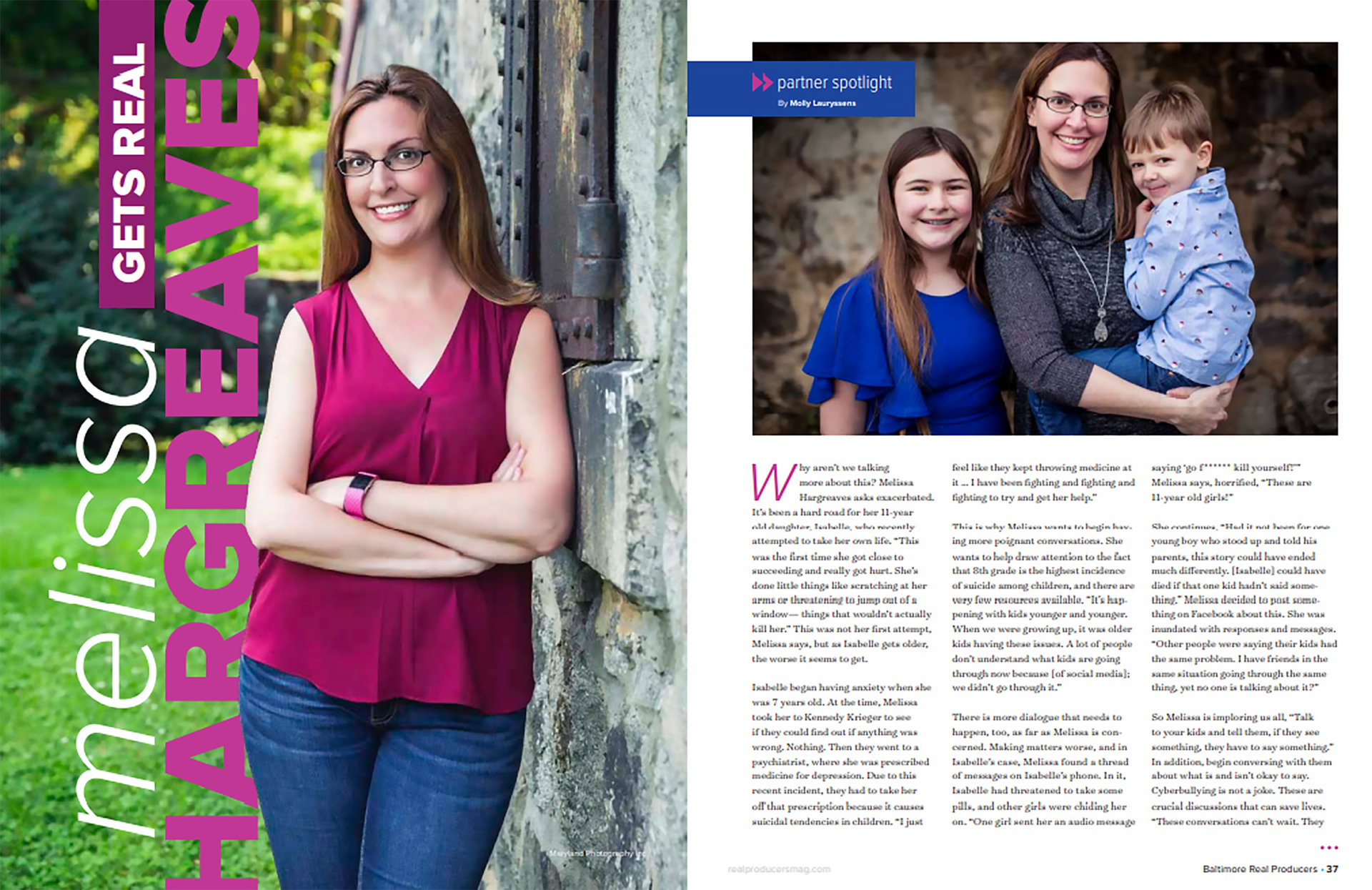 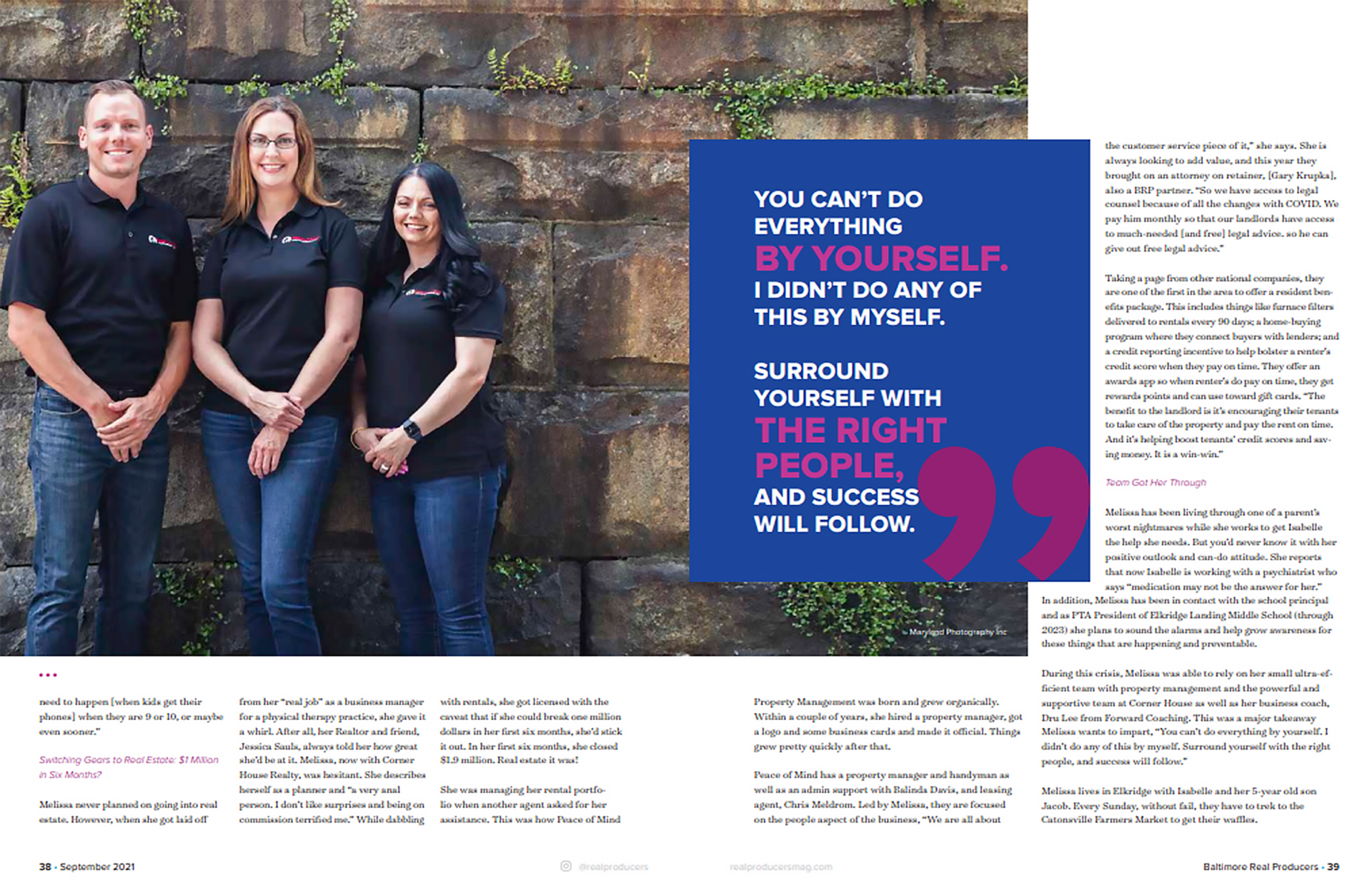 “Why aren’t we talking more about this?” Melissa Hargreaves asks exacerbated. It’s been a hard road for her 11-year-old daughter, Isabelle, who recently attempted to take her own life. “This was the first time she got close to succeeding and really got hurt. She’s done little things like scratching at her arms or threatening to jump out of a window—things that wouldn’t actually kill her.” This was not her first attempt, Melissa says, but as Isabelle gets older, the worse it seems to get.

Isabelle began having anxiety when she was 7 years old. At the time, Melissa took her to Kennedy Krieger to see if they could find out if anything was wrong. Nothing. Then they went to a psychiatrist, where she was prescribed medicine for depression. Due to this recent incident, they had to take her off that prescription because it causes suicidal tendencies in children. “I just feel like they kept throwing medicine at it. … I have been fighting and fighting and fighting to try and get her help.”

This is why Melissa wants to begin having more poignant conversations. She wants to help draw attention to the fact that 8th grade is the highest incidence of suicide among children, and there are very few resources available. “It’s happening with kids younger and younger. When we were growing up, it was older kids having these issues. A lot of people don’t understand what kids are going through now because of [social media]; we didn’t go through it.”

There is more dialogue that needs to happen, too, as far as Melissa is concerned. Making matters worse, and in Isabelle’s case, Melissa found a thread of messages on Isabelle’s phone. In it, Isabelle had threatened to take some pills, and other girls were chiding her own. “One girl sent her an audio message saying, “Go f****** kill yourself!” Melissa says, horrified. “These are 11-year-old girls!”

She continues, “Had it not been for one young boy who stood up and told his parents, this story could have ended much differently. [Isabelle] could have died if that one kid hadn’t said something.” Melissa decided to post something on Facebook about this. She was inundated with responses and messages. “Other people were saying their kids had the same problem. I have friends in the same situation going through the same thing, yet no one is talking about it?”

So Melissa is imploring us all, “Talk to your kids and tell them, if they see something, they have to say something.” In addition, begin conversing with them about what is and isn’t okay to say. Cyberbullying is not a joke. These are crucial discussions that can save lives. “These conversations can’t wait. They need to happen [when kids get their phones] when they are 9 or 10, or maybe even sooner.”

Melissa never planned on going into real estate. However, when she got laid off from her “real job” as a business manager for a physical therapy practice, she gave it a whirl. After all, her Realtor and friend, Jessica Sauls, always told her how great she’d be at it. Melissa, now with Corner House Realty, was hesitant. She describes herself as a planner and “a very anal person. I don’t like surprises and being on commission terrified me.” While dabbling with rentals, she got licensed with the caveat that if she could break one million dollars in her first six months, she’d stick it out. In her first six months, she closed $1.9 million. Real estate it was!

She was managing her rental portfolio when another agent asked for her assistance. This was how Peace of Mind Property Management was born and grew organically. Within a couple of years, she hired a property manager, got a logo, some business cards and made it official. Things grew pretty quickly after that.

Peace of Mind has a property manager and handyman as well as an admin support with Balinda Davis, and leasing agent, Chris Meldrom. Led by Melissa, they are focused on the people aspect of the business. “We are all about the customer service piece of it,” she says. She is always looking to add value, and this year they brought on an attorney on retainer, [Gary Krupka], also a BRP partner. “So we have success to legal counsel because of all the changes with COVID. We pay him monthly so that our landlords have access to much-needed [and free] legal advice, so he can give out free legal advice.”

Taking a page from other national companies, they are one of the first in the area to offer a resident benefits package. This includes things like furnace filters delivered to rentals every 90 days; a home-buying program where they have contract buyers with lenders; and a credit reporting incentive to help bolster a renter’s credit score when they pay on time. They offer an awards app so when renters do pay on time, they get rewards points they can use toward gift cards. “The benefit to the landlord is it’s encouraging their tenants to take care of the property and pay the rent on time. And it’s helping boost tenants’ credit scores and saving money. It is a win-win.”

Team Got Her Through

Melissa has been living through one of a parent’s worst nightmares while she works to get Isabelle the help she needs. But you’d never know it with her positive outlook and can-do attitude. She reports that now Isabelle is working with a psychiatrist who says, “medication may not be the answer for her.” In addition, Melissa has been in contact with the school principal, and as PTA President of Elkridge Landing Middle School (through 2023) she plans to sound the alarms and help grow awareness for these things that are happening and preventable.

During this crisis, Melissa was able to rely on her small, ultra-efficient team with property management and the powerful and supportive team at Corner House as well as her business coach, Dru Lee from Forward Coaching. This was a major takeaway Melissa wants to impart, “You can’t do everything by yourself. I didn’t do any of this by myself. Surround yourself with the right people, and success will follow.”

Melissa lives in Elkridge with Isabelle and her 5-year-old son, Jacob. Every Sunday, without fail, they have to trek to the Catonsville Farmers Market to get their waffles.

More from the Blog